Pronghorns have a special place in the history of Highlands Ranch!  They are unique and beautiful animals, and once roamed freely on the land that would become Highlands Ranch.

TAH KEEN CHA is located at the entrance walk to Westridge Recreation Center
The sculpture is larger than life-sized, and anatomically correct.

The plaque at the base of TAH KEEN CHA reads: “TAH KEEN CHA, a Tribute to our Community Spirit.  Placed by the Highlands Ranch Cultural Affairs Association, Sculptor Larry Perkins, Dedicated 2003″

Some interesting facts about Pronghorns:

In the video, Larry also discussed the Art Encounters program and another of his sculptures, entitled “Fully Involved”, which is located in Firefighters Park in Tacoma Washington, and honors Tacoma Fallen Firefighters.   Learn more about the Memorial and his sculpture HERE 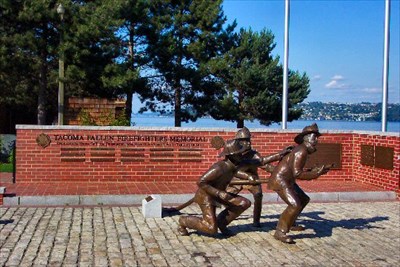 Pronghorns have also been recognized as a great name for a Park!
Pronghorn Park is located in the Weatherstone subdivision at 10625 Weathersfield Way, HR  80129
The park has a picnic shelter, playground, restrooms, trails, playing fields.